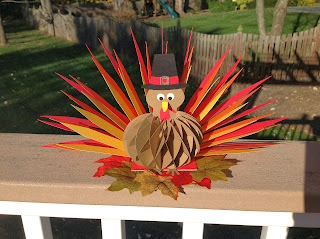 This table decoration can pull double duty.  It is beautiful to look at but it can also be a trivia game...that is why I entitled this post, "Plucking Turkey Feathers".  There are 45 feathers and you can put interesting Thanksgiving trivia questions on them.  The person who guesses the most questions wins another slice of pie for Thanksgiving dinner. Or for those math teachers out there.  You can put 45 math problems on them and let the student select which one they want to do....just write numbers on the feathers and put them randomly in the plume. Have a sheet of 45 math problems and give the students the corresponding question.  You can reuse the turkey for different classes by reinserting the feathers.

Here is the free .Studio file for the turkey.
https://drive.google.com/file/d/0B7oGIyVDbRGYMFpjeXpVODJTSnc/edit?usp=sharing

Here is the PDF of this same turkey if you do not have a Silhouette.  There is a lot of cutting by hand but I think it is definitely worth the effort.
https://drive.google.com/file/d/0B7oGIyVDbRGYR3ZEZkd4WTZtd1k/edit?usp=sharing 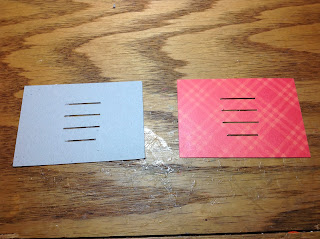 Cut out the base out of chipboard or a cereal box. Cut out another base this time out of decorative paper.  Glue the decorative paper to the chipboard...make sure that you align the slots.  One of the slots is smaller than the others.  This smallest slot is where the turkey body gets attached. 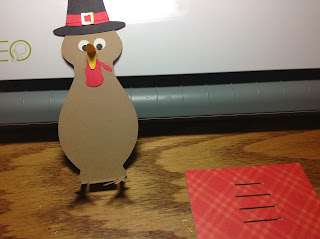 Can you guess how I made the shape of the turkey body?﻿

Decorate the turkey body with the eyes, beak, hat and waddle before you glue the body to the base.  I made two copies of the hat and brim so that the turkey will look nice on both sides. Also attach the honeycomb decoration, if you would like but it is not necessary.  This honeycomb is created using a torus villarceau circle.  I mentioned its origin in a previous post. http://papercraftetc.blogspot.com/2013/07/sliceforms-are-my-new-obsession.html

The directions for making it are on the pumpkin post.
http://papercraftetc.blogspot.com/2013/10/a-honeycomb-pumpkin-decoration-for-fall.html 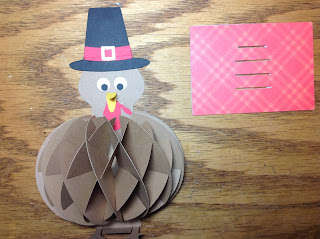 The turkey body is in the shape of a bowling pin!
﻿
Cut out 9 copies of each semicircle to make the honeycomb.  Glue it to the body as shown below. Cut out another turkey body and glue it on the back before you attach the hat.  I forgot and had to slide the turkey body under the hat.  I also add a spine to the center of the body as shown in the picture to give the turkey more support (I cut this out of the chipboard with scissors as there is no need for a perfect measurement.) Here is the back of the turkey. 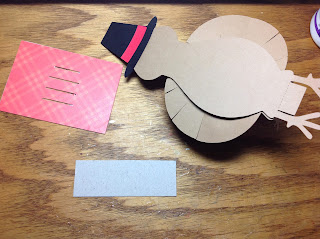 Spine is the gray piece of paper
﻿
I glued the feet together and have them facing forward.  The tabs will be split apart.  One will be glued forward and the other backward on the bottom of the chipboard base. You will have to cut the backward facing tab a little...1/8 of an inch since I did not want to make the front facing tab any smaller.  Glue the feet to the base. 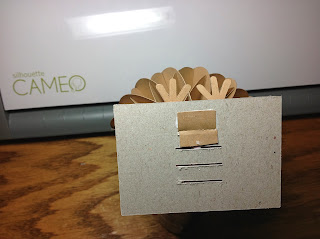 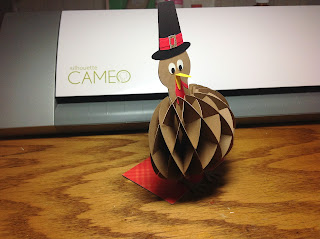 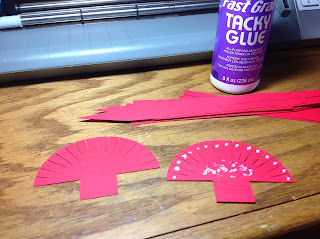 Glue the two fans together but do not glue the tabs together.  These tabs will be used to adhere the fan to the base. Insert the tabs in the base.  Rip off the side that will interfere with the next base. 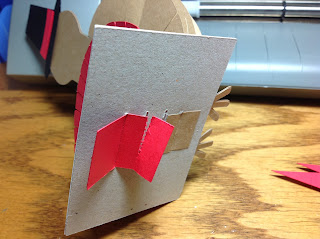 Repeat for the other two fan bases.  Slide the feathers into the fan base. I liked inserting the smallest, then the middle and then the largest feather...continuing through the entire fan. 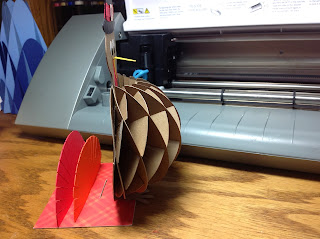 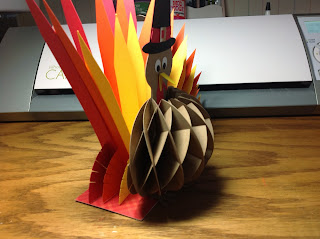 Attaching the feathers from one side to the other.
﻿ 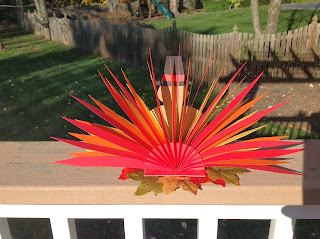 The back side of the turkey looks just as beautiful as the front.
﻿
Posted by Elaine Wolfe at 3:07 PM