Using the images that I created in a previous post of a pumpkin and apple, I created a sliceform version.  I made a circle with a six pointed slit in the middle (60 degree angles were used to create this).  This circle slides down the center of the pumpkin/apple to create this sliceform.  They both have three horizontal slices. 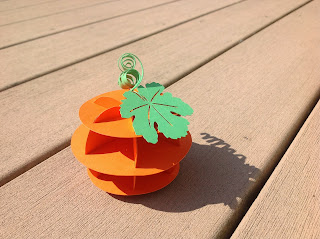 The pumpkin version has the largest circle in the middle. 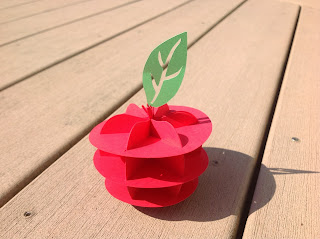 The apple version has the smallest circle at the bottom and the largest circle on top.

Here is the .Studio file for making one pumpkin.  I used cardstock and I have included a leaf and a curly vine to make. To make a curly vine, twirl the paper around a pencil.

Here is the .Studio file for making one apple.  I used cardstock and I have included a leaf for the apple.