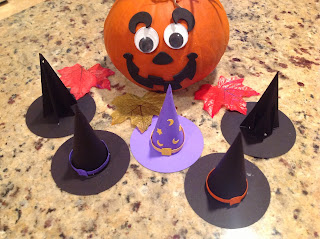 I made three versions of witch's/wizard's hat for Halloween.  In designing them,  I kept the values of pi, 3.14 and the golden ratio or phi, 1.618 in mind because these ratios create images that are pleasing to the eye.  Sadly, the Silhouette designer software rounded the 1.618 value to 1.62 so it is not exact.  I created circles that are 3.14 inches in diameter and the hat is 1.62 inches tall.  It is a little longer for the tabs at the bottom of the hat...but it was 1.62 inches...just in case you were wondering and looking at the file.

Here is the .Studio file of the first witch's hat that I created.  I used cardstock. 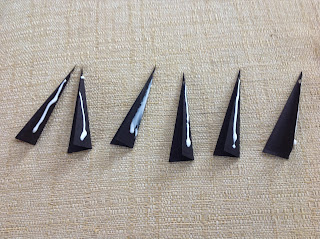 Glue the six triangles together. 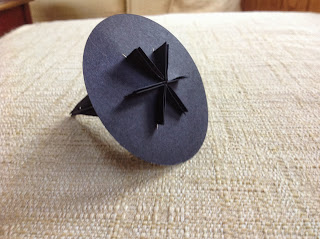 Slide into the circle with the star pattern. 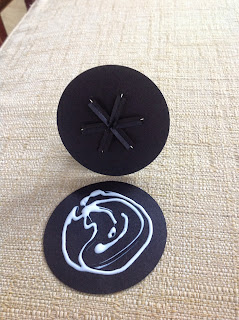 Fold and glue the tabs to the circle.  Glue the circles together. The next hat is a cone net that I designed.  At first, I thought I would not have to design my own.  There are quite a few already online.  I looked at two and discovered that they were not perfect. I needed to make my own which is not too difficult but time consuming.  I started with a straight line that I copied and rotated with the Silhouette software so that the distance from the apex or top of the cone is consistent throughout the net. It is not as easy as it seems because the bottom curve is not a circle and it needed to be adjusted to be more pleasing the eye.  It looked like a bunch of straight lines that were curved. Yes, circles can be formed this way but a lot more tiny straight lines need to be added to make it perfect.

Here is the .Studio file for the cone net witch's or wizard's hat.  I again used cardstock to cut out this model.

This file contains two versions of brims.  The top brim is for gluing on the outside of the hat.  The bottom brim is for gluing on the inside of the hat.  The choice is yours.  It is easier to glue the brim on the outside of the hat but the tabs show a little too much. You can hide a little of this problem with the hat band. I decided to create the second brim with the tabs on the inside of the hat because it looks better.  There are two versions of the hat design.  One with a hole so that you can hang it as an ornament and the other is without the holes. There are two versions of a buckle for the hat band. I also included some stars and moons if you would like to make it into a wizard's hat.  I would recommend training the cone net into a circle before gluing as it makes it easier to attach together. 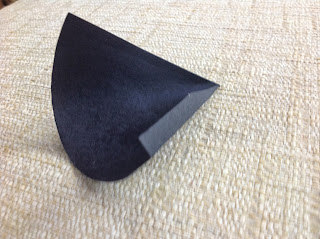 Also I would recommend gluing at the bottom of the cone before closing at the point.  I also pinched the cone together along the seam to help the glue dry. 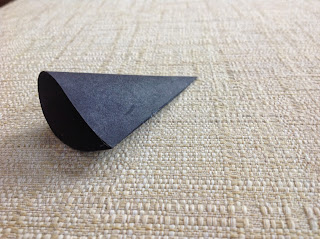 You can readjust the curvature once the cone has dried completely. 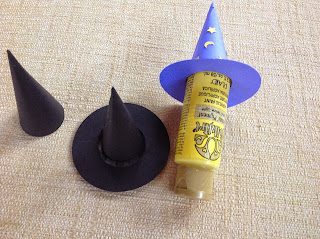 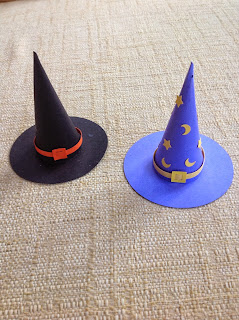 The third version is a sliceform witch's hat.  You slide the corresponding pieces together to form the hat and then glue on the base. 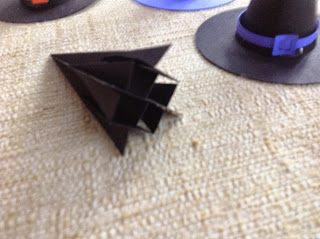 Here is the .Studio file for the sliceform witch's hat. Again I used cardstock for the model. 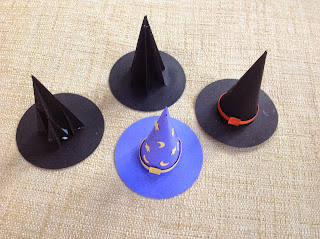 Completed models
Update:  I just made a witch's broom ornament.  Here is the .Studio file.
https://drive.google.com/file/d/0B7oGIyVDbRGYMVZmT0JUdUZTcXc/edit?usp=sharing
Roll the piece with the hole in it so that the hole is on top and glue into a tube for the broom handle.  Roll the fringe around the broom handle and glue.  Add the long strip and attach as shown in the picture below. 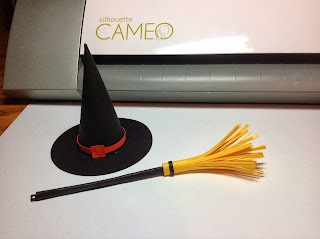