When It Snows...Make Christmas Ornaments 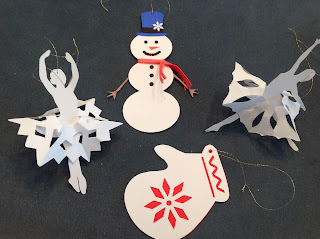 Wow...another snow day...two days in a row. What better way to make use of a snow day then to make some Christmas ornaments. I made a snowman, a pair of gloves and my favorite...a snowflake ballerina.


Here is the PDF file of these ornaments.
https://drive.google.com/file/d/0B7oGIyVDbRGYNl9kNE5ZVTR1dG8/edit?usp=sharing

Here is the .Studio file of the ornaments.  I used cardstock for everything except for the ballerina's tutu(snowflake) where I used regular white copy paper.
https://drive.google.com/file/d/0B7oGIyVDbRGYdl92eHhMbEl4aVE/edit?usp=sharing

The snowman duplicates the same design as Mr. Torus Snowman from yesterday's post.  http://papercraftetc.blogspot.com/2013/12/mr-torus-snowman.html Cut the front and back of the snowman and sandwich in some colored paper between the two so that there is color for the eyes, nose, mouth and buttons.  The alternative is to use markers to add details to the snowman. To make the scarf, train the paper to go into a circle and then bend it in half lengthwise so that it will fit around the snowman's neck. 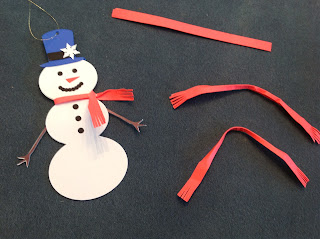 Work with the paper to make it more pliable so that you can bend it in half and wrap it around the snowman's neck.  Add a drop of glue where the scarf overlaps at his neck.
﻿
I made two copies of each hat and hat band so that the snowman will look good on either side so that you could hang it on a tree. I also added a snowflake to his hat for some interest. 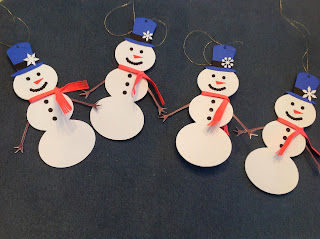 Here are my very handsome snowmen

For the glove ornament, cut two of the gloves with the design on white cardstock and one plain glove on colored paper so that when you sandwich the paper together, the inside color shows through. Use a needle and thread to add a hangar to the glove ornament. 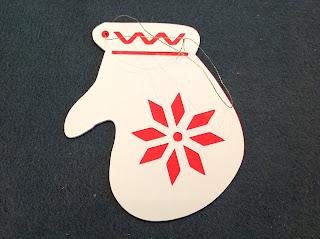 I added a hole in the top left corner of this glove for the hangar.

The snowflake ballerina is made by folding the hexagon shaped piece of paper into six triangles. 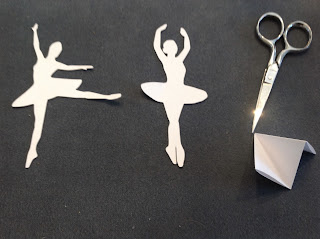 Fold the hexagon into a triangle.  I have opened it a bit so that you can see where you need to cut out the point of the triangle.﻿

Cut the angle where all of the triangles meet...this will be where the ballerina's body will be attached. I suggest cutting a half inch triangle. 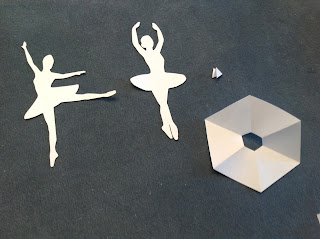 Here is what it looks like after you cut out the point of the triangle.  This is the ballerina's waist.﻿ 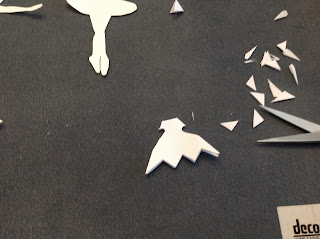 Cut the edges of the triangle to make the snowflake. 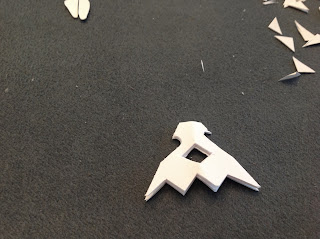 I folded the triangle in half to cut the center. 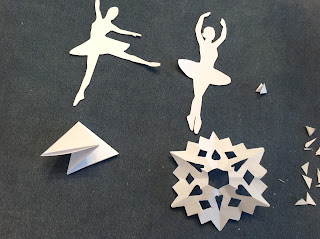 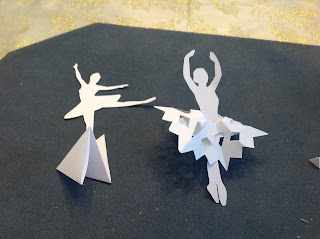 I hung my ornaments on the chandelier to add some Christmas cheer to the dining room.
#Christmas Ornaments﻿