Can You Name the Three Ships That Sailed with Columbus?

In 1492, Columbus sailed the ocean blue...on the Nina, the Pinta and the Santa Maria. So why do I ask, because I am going to give you a .Studio file of these ships. 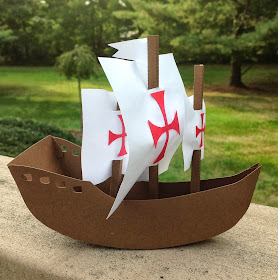 My husband woke me up at 4:45 the other morning because he wanted to study for his Mathematics for Economics course at Johns Hopkins. I could not go back to sleep so I decided to make a ship for Columbus Day before I went to work.

Here is the .Studio file for the ship. I used cardstock
https://drive.google.com/file/d/0B7oGIyVDbRGYSExJcUR1VHhVWFU/view?usp=sharing&resourcekey=0-UYoxFIhStsgEKggbB4HdSw

Here is the .Studio file for the masts. I used regular white copy paper for the sails and red cardstock for the cross. 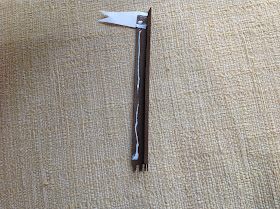 Glue the flag on the main mast...longest one and apply glue as shown above.  Make it into a square tube.  Glue the red cross on the white sail.  Attach as shown below. Repeat for the other two poles. 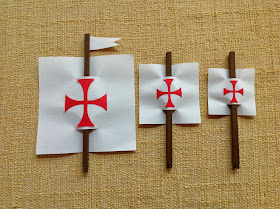 Curve the body of the ship as below before gluing on the side of the ship. 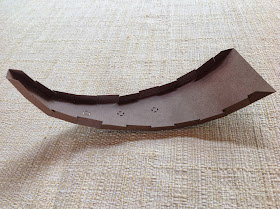 Glue on the sides starting at the back of the ship for alignment.  Attach the masts by putting the tabs into the slots and glue underneath the ship as shown below. Yes...it is a little messy but no one will see it. Repeat for all masts. 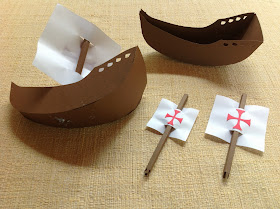 All ready for Columbus Day! 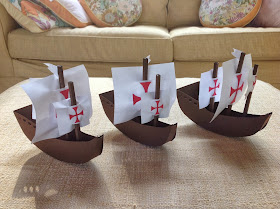 PDF files of ship and masts

Here is the complete 1492 poem just in case you were trying to remember it...

He had three ships and left from Spain;
He sailed through sunshine, wind and rain.

He sailed by night; he sailed by day;
He used the stars to find his way.

A compass also helped him know
How to find the way to go.

Ninety sailors were on board;
Some men worked while others snored.

Then the workers went to sleep;
And others watched the ocean deep.

Day after day they looked for land;
They dreamed of trees and rocks and sand.

But “India” the land was not;
It was the Bahamas, and it was hot.

The Arakawa natives were very nice;
They gave the sailors food and spice.

Columbus sailed on to find some gold
To bring back home, as he’d been told.

He made the trip again and again,
Trading gold to bring to Spain.

The first American? No, not quite.
But Columbus was brave, and he was bright.
Elaine Wolfe at 4:42 PM
Share